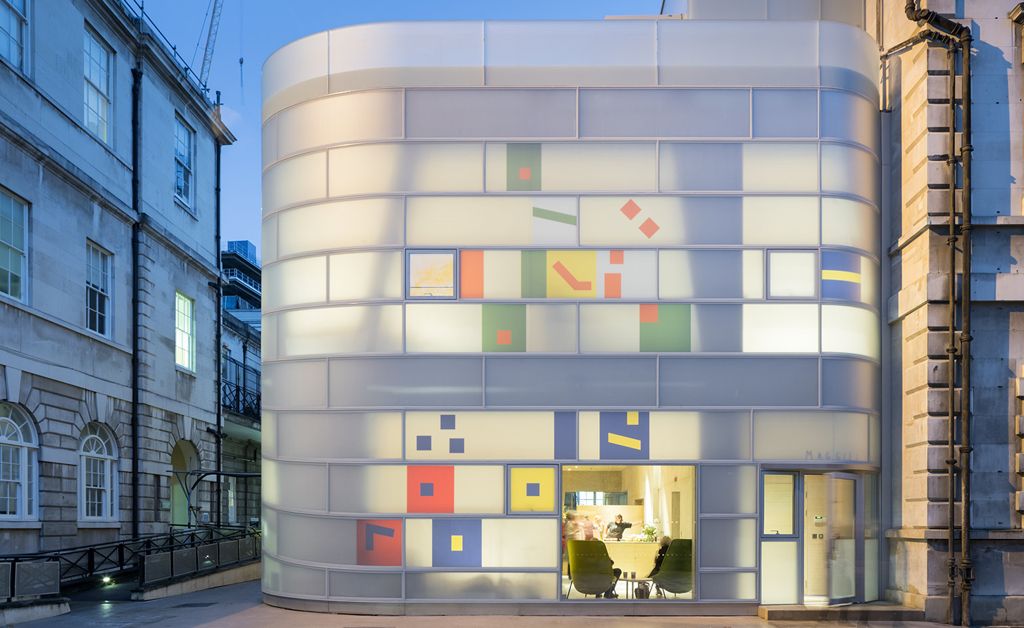 When New York-based architect Steven Holl started piecing together ideas for the newest Maggie’s cancer care centre at St Bartholomew’s Hospital, he knew that the structure was going to form a pivotal part of a much longer story. Adjacent to the 18th-century stone building by architect James Gibbs, the design of Maggie’s Centre Barts reveals a softened, translucent exterior in the day in contrast with its lantern like state at night; an intentional feature that Holl says distinguishes the care centre from the medieval structures that surround it.

Inspired by the musical notation in existence at the time the hospital was founded in 1123, the three-storey vertical design mimics the stretch and fluidity of the musical staff against five horizontal lines. The nonlinear elements of shape-notes, represented by coloured glass, connect the new structure to the history on which it stands. Selected for his ability to manipulate the use of light, Holl wants the Maggie’s Centre Barts to create a dialogue for future generations as he believes how we design today has a place amongst historical work.

Following the conceptual framework of a ‘vessel within a vessel within a vessel’, Holl constructed the enclosure using glass, concrete and bamboo. Opposed to the dominance of shiny glass buildings, Holl created a matte exterior using Okalux edged glass. By cutting a single pane into two, Holl invented a 21st-century illusion of original stained glass by positioning a coloured film between the Okalux panels.

Straw-like fibres imitating the qualities of polar bear hair were slotted between the singular pane cut in two, creating a textured opaqueness from the outside. With a gently sloped concrete staircase spiralling the interior perimeter of the building, the bamboo panelling is highlighted throughout the interior. From the inside the reflection of the steel lined exterior parallels the rhythmic rotation of the interior, utilising the textured opaqueness of the glass to soften the cement. By allowing only the direct sunlight and coined shadows from the Gibbs building to enter the building, there is a sense of seclusion and mindfulness within.

With limited vision of the hospital, the Maggie’s Centre Barts opens those living with cancer to the west facing rooftop garden designed by Darren Hawkes, an aspect that puts into proximity only trees and vacant sky. Insularly structured, the protection and autonomy that the building strives to infiltrate in those living with cancer illustrates why architects like Holl continue to push the boundaries of what design can achieve. 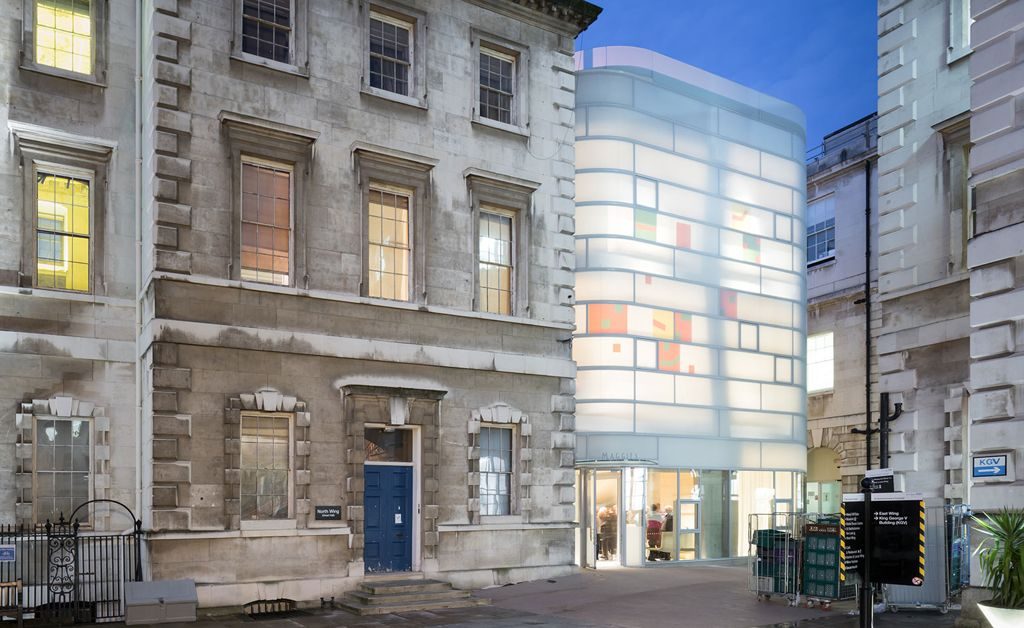 The building features a softened, translucent exterior in the day, which lights up like a lantern at night. Photography: Iwan Baan for Steven Holl Architects 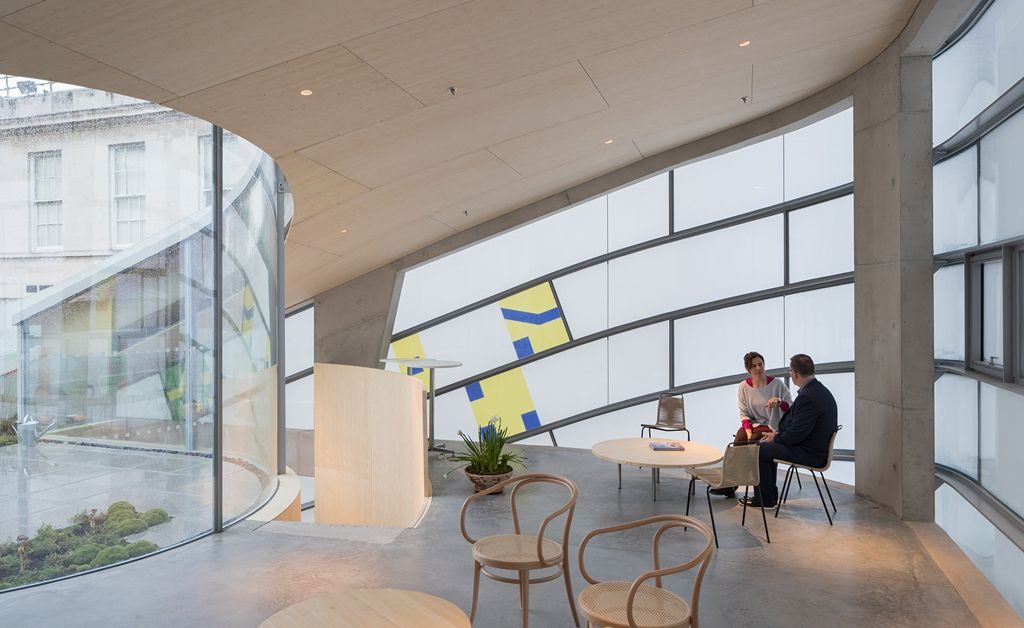 The structure spans three levels and its fluid interior was inspired by music. Photography: Iwan Baan for Steven Holl Architects 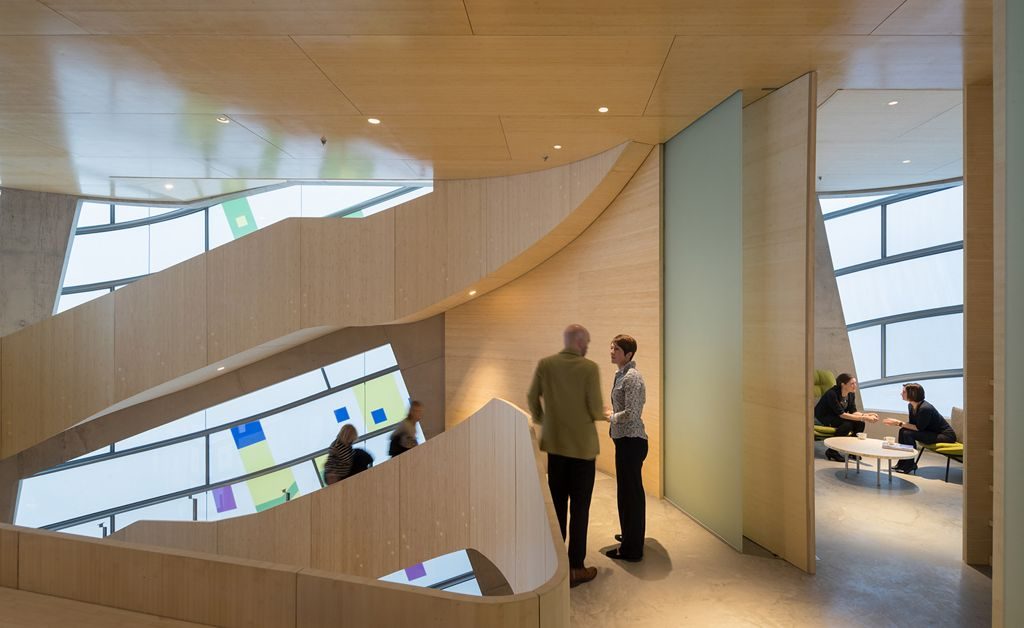 Holl was selected to create this centre specifically for his ability to manipulate the use of light. Photography: Iwan Baan for Steven Holl Architects