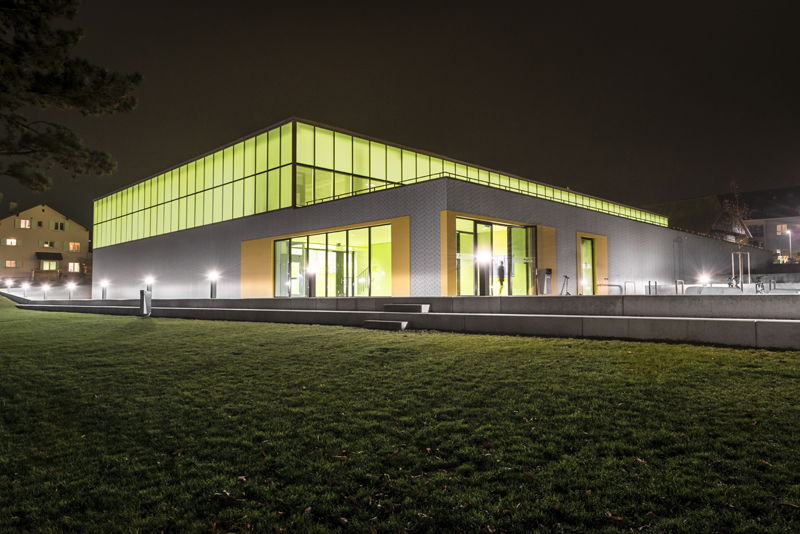 The Neumatt sports hall in the Swiss township of Strengelbach has a captivating ornamental base and glass top of OKALUX K insulating glass with capillary insert. 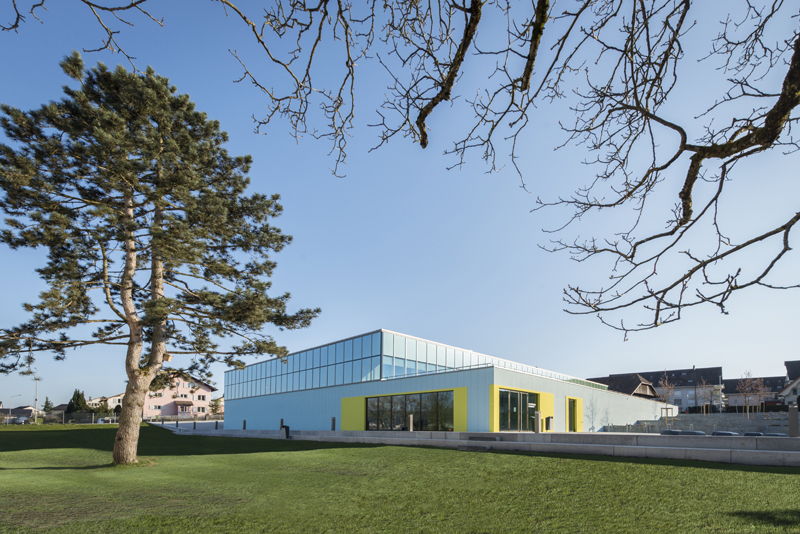 The threefold sports hall in the Swiss township of Strengelbach is optically divided in two volumes. The building has a captivating ornamental base and a glass top of light diffusing OKALUX K insulating glass with capillary inserts.

Marktheidenfeld, April 2017. With their multifunctional threefold sports hall in the Swiss township of Strengelbach, the architects from Evolution Design in Zurich have created a building with which the entire community can identify: Its integration in the Neumatt school complex, consisting of school buildings from various periods of origin, forms the borders of the school yard to the south. Its new construction, imbedded in the landscape in the form of a terrace, offers attractive areas for relaxation far from any kind of sports activity, with its forecourt, sitting steps, and green terraces.

In spite of its three sports areas, the Neumatt sports hall’s dimensions remain manageable. This results from the optical division of the building’s construction in two horizontal volumes. 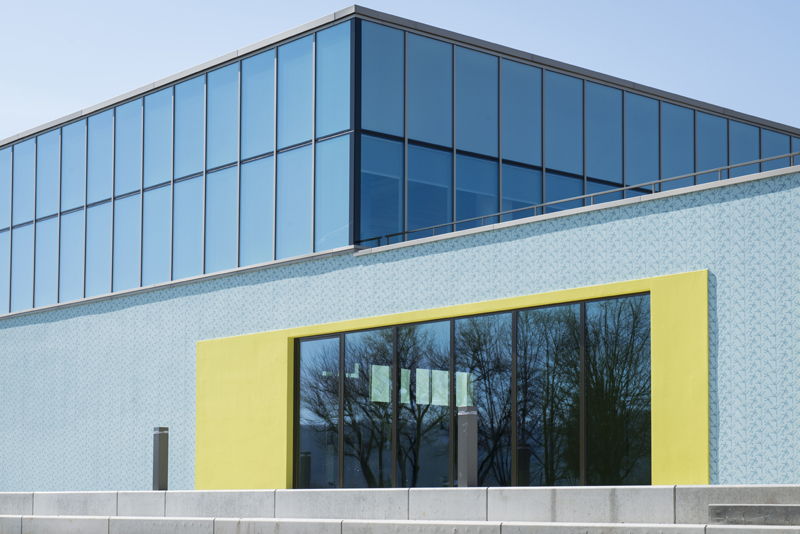 The somewhat larger ground floor block has a green roof area which also serves as a connection to the spectator gallery on the upper floor. Completely plastered, this lower part of the volume looks like a kind of base – although generously dimensioned floor-to-ceiling windows loosen up the shell in the reception area.

An ornament, consisting of three symbolically portrayed sports disciplines, extends over the entire plastered area adding life to the façade design. While the ground floor is thus rendered visually tangible, the glass block on top seems to disintegrate through the reflections of the sky and the surroundings during the day.

The architects catered the entire design to the young user. This becomes obvious in the plastered frames around the windows painted in a fresh yellow which, in addition to the sports symbols, liven up the façade. 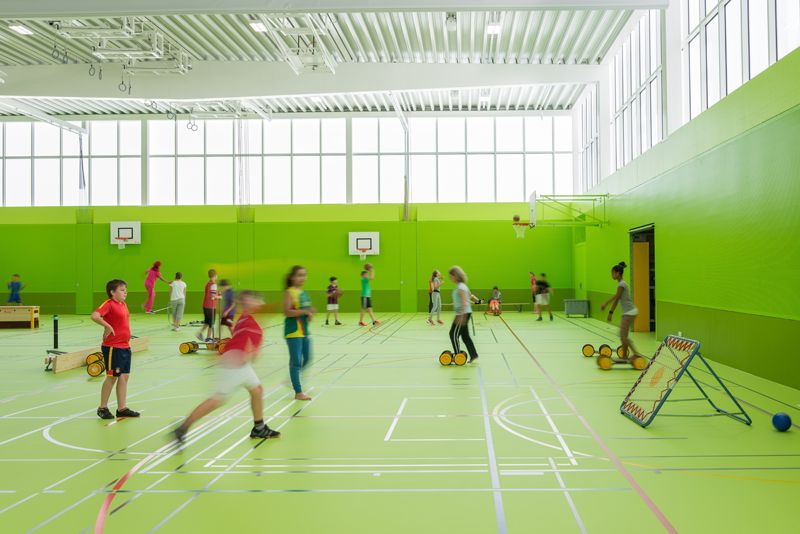 They function as accents while giving a taste of the colorful interior of the building: The hall on the ground floor glows in shades of green in various hues and intensity, which extend to the floors, walls and doors. The color scheme of the locker rooms is influenced by the field markings of various games. The exposed surface is painted in a different color for each locker room. Each color is repeated in the hall and serves orientation and identification. The use of colors in the design lends the building a vivid effect in the evening, too, when the glow of the fresh green can be seen from the outside through the glass body. 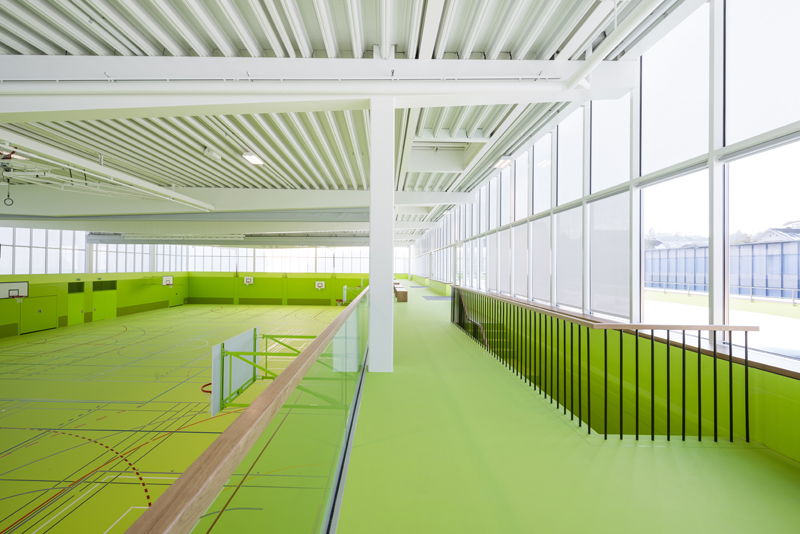 Only the lower glazing along the spectator gallery was carried out partial transparently – to allow for views to the in- and outside.

During the day, the hall and gallery is illuminated by natural light. Equipped with light-diffusing OKALUX K insulating glass all around, the post and mullion constructed top enables a glare-free, even flooding of natural daylight into the hall. Only the lower glazing on the north-west façade along the spectator gallery was carried out in a partially transparent manner to allow for views to the in-and outside. The required sun protection was integrated in the glass construction by the direct insertion of the capillary inlay. In addition to creating an architectural eyecatcher, the challenge of fulfilling all of the requirements on a sports hall concerning light transmission, privacy, UV, heat and noise protection, was elegantly met. “It is important, that children grow up in environmentally-friendly buildings”, said Marco Noch, technical director at Evolution Design. “We want to show them that the world of tomorrow is not a world of endless resources.” The Neumatt sports hall was distinguished with the A’Design Award Silver in 2016.

When used in the evening, the glow of the fresh green can be seen through the glass body giving the building a striking appearance.