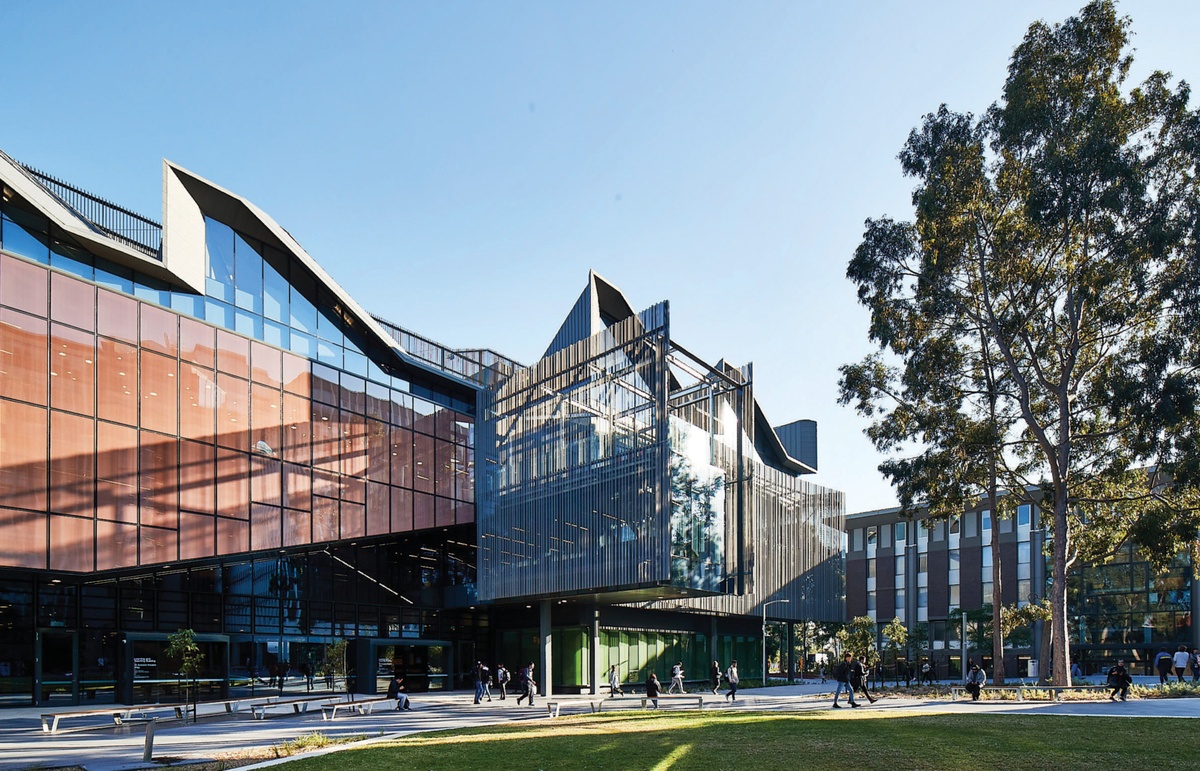 It is a more than usually hectic forty-eight hours at John Wardle Architects (JWA) and that is saying something. The previous evening, to a packed flag- raising soiree, the remarkable duo of Will and Garrett Huxley performed an elegiac version of Abba’s “SOS,” complete with sequined onesies. A dozen of the staff are somewhere other, installing Somewhere Other in a thirteenth-century Venetian boatshed and the directorial team will follow tomorrow. Somehow, the JWA team finds time to give me the full story on the new Monash University Learning and Teaching Building [LTB] at the Clayton Campus. SOS indeed.

At 29,000 square metres of educational accommodation (and another 11,000 square metres of bus interchange, carpark and service pavilions), the $265 million LTB project offers plenty of challenge – not least to its outer suburban campus and neighbouring 1960s and 70s building stock. Catalysed by the Clayton Campus Masterplan and Better Learning, Better Teaching agenda, Monash’s ambition was for an identifiable gateway to the campus and a step change in teaching modes.

Acknowledging the site’s bushland heritage, the project is an extended meditation on building as landscape; its zinc cladding recalls stringybark forests and agrarian paddocks, while its roofscape speaks to the pitched roofs of nearby suburbia. Image: Peter Bennetts Although the primary users are the Faculty of Education and the Office of Learning and Teaching, the LTB is a multi-faculty facility that aims to be a hub of activity and cross-disciplinarity. Like other radical transformations of urban tertiary campuses (for example, Lyons’ New Academic Street and Swanston Academic Building for RMIT), it aspires to provide compelling student experiences that encourage students to stay on campus. Why is this so important to our earnestly competing institutions, when educational delivery is increasingly virtual? Cynically, one might suppose that it is to attract the international market, but research shows the benefits of peer-to- peer learning. Plus, with the trend toward inter-sectorial collaborations, universities have sound reasons to develop holistic, accessible campus environments. 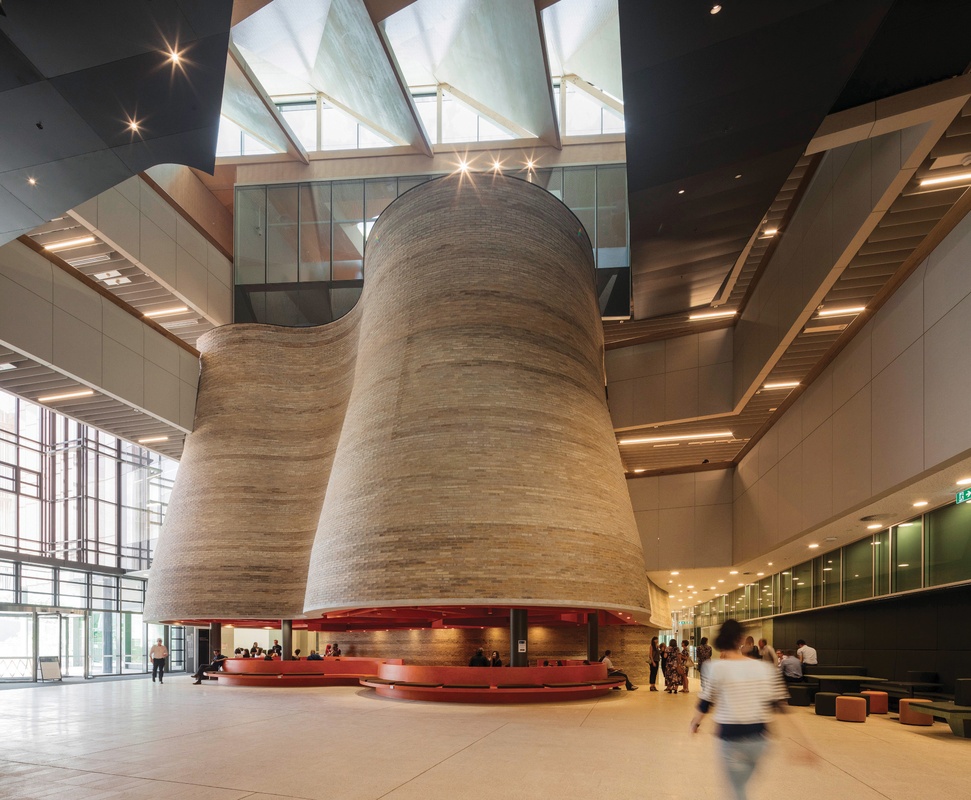 Recognizing the bushland heritage of the site and the original campus plan’s focus on expansive native landscaping, the project is an extended meditation on building as landscape and sits comparatively close to the land. With a respectful nod to Capability Brown, the surrounding green swathes are drawn in and exaggerated by clever insertions that frame and define approach. Most striking of these are massive parallel cerulean steel walls in the bus interchange, which evoke the grand portals of Victorian railway stations. Otherwise, the form is imprinted with geometries borrowed from regional contexts: stringybark forests and agrarian paddocks shape and pattern the zinc cladding, while the roofscape acknowledges the pitched roofs of nearby suburbia.

Three key entry points deal with the startling volume of pedestrian traffic, with a symbolic Tree House to the west a miniature demonstration of the whole. Like a grand cubby, this is a place to see and be seen, where students are the elevated gatekeepers of the province. By encompassing natural pathways and park context, the ground plane forms a continuous terrain rather than bounded floor, with subtle gradients introduced to break up the large footprint and link to other campus levels seamlessly. It’s a trick JWA has used previously in the Melbourne School of Design and though LTB is twice the size, it is equally effective here. Maximizing the connection with light and views, program is orchestrated to the perimeter at all levels, opening up an interior landscape of architectonic ravines, grottoes and escarpments, while still prioritizing visual permeability from edge to centre. It is a deft feat of putting learning on show.

In fact, in this rich field of spatial experiences, learning becomes a spectacle. Internally, the devices of “building as landscape” are amplified around different teaching modes and carry memorable tags, such as the Kilns. Massive brick towers inspired by Stoke-on-Trent pottery kilns face off across the main crossing and foster student culture. The JWA team explains: the rough clay of brickwork is analogous to the raw material of the student cohort, which through the high-firing of tertiary education attains durability and fineness.

Elsewhere there are large circular caves of rooms for collective delivery and cypress green terraces of tables for “blended learning” (something between mass tutorial and lecture). And everywhere there are intimate nests and perches for informal study, at a ratio five times that of formal teaching places.

Four major stairs give a choice of fast or slow circulation and reinforce the refrains of educational innovation and landscape. The Spine Stair, for example, carves a vivid green section through the atrium, exposing the assemblage of the whole scheme and arriving directly at the Faculty of Education. This sectional exposé is a JWA trope dating back to one of its defining projects, the RMIT International Centre of Graphic Technology of 1998, and refined here for panoramic impact. By contrast, the Escarpment Stair meanders from an active base to more private study banquettes on the top floor. Everything it touches is realized in timber, obedient to another JWA signature – the self-imposed project “rules.” Climbing toward the light of the Inhabited Roof, past clusters of busy young things, I’m reminded of Louis Kahn’s eloquent diagram for the Exeter Library of reading in the light. Here the overhead hoop pine roof hoods similarly warm and illuminate the act of study. And I’m struck by how studious this place is. Part of it is the skilful acoustic balance, where any surface not required to be enduringly hard is instead working hard to control ambient sound and add sensory texture. It can also be attributed to the consistent focus on providing a diversity of human-scaled educational spaces that are just good to be in, rather than a diverting array of extracurricular and consumer facilities. There are no hairdressers, sports shops or ping-pong tables here and the two hospitality outlets are discreetly buffered so the bump and grind of the baristas doesn’t distract. 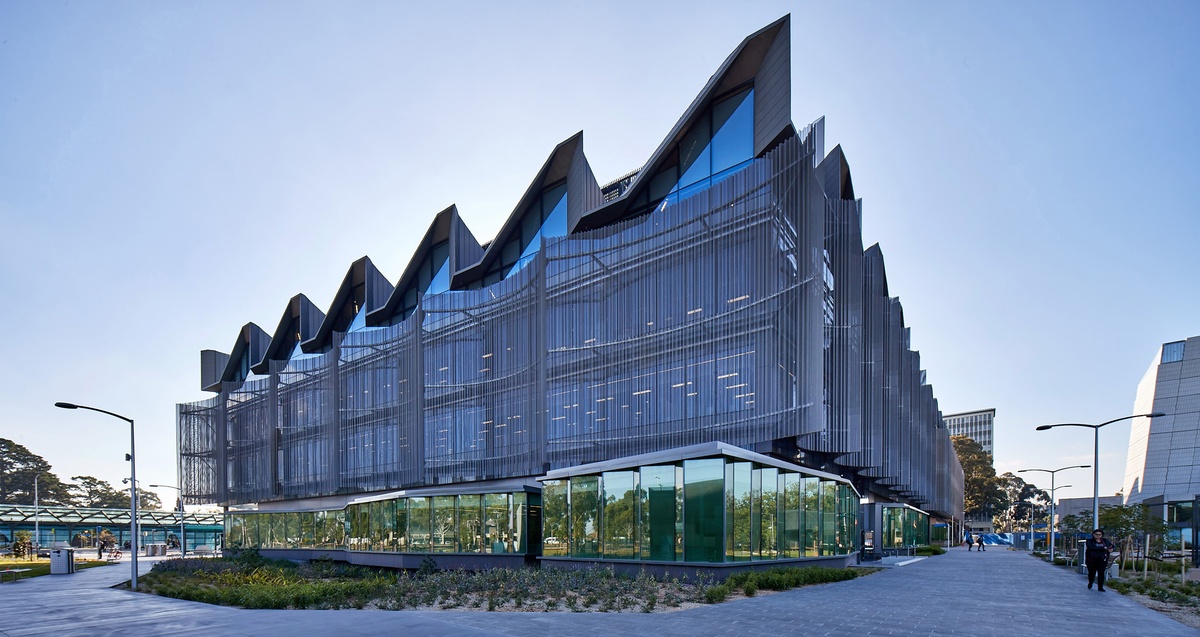 The ease with which the components of this project come together is deceptive; here is a huge brief, a punishing user group and a potential no place of a site. Yet already there are stories woven into its making and occupation, from the exemplary masonry of the family-owned brickwork company Krause to the daily tales of university life playing out in the alcoves and neighbourhoods around me. It’s the result of JWA’s lineage of good design practice: in client consultation, craft and spatial inspiration. The firm does fewer projects annually than places of comparable size and it shows; the team makes work of this virtuosic calibre appear easy.

Monash’s motto, Ancora Imparo , means “We are still learning.” And Ancora Imparo Way is, literally, the pathway through this project. In a meta-educational environment (where the teachers teach the teachers), this maxim underpins the LTB as an aspirational, experimental space. It’s also in perfect synergy with JWA’s sustained design attitude. The JWA architects may be at the top of their professional game, but they have the humility and the curiosity to approach each project with fresh ambition.